You are here: Home » 2012 Cambodia » Reciprocity: taking care for each other

Taking care for someone contains a world of images, experiences of stories for everyone around the world. Some people have negative connotations, others positive. We have found that the meaning of taking care for each other is a very important difference between countries, especially between our country of origin, The Netherlands and the Kingdom of Cambodia.

Somehow the image of taking care for elderly in my mind has become a one-way path: How to take care for our elderly? In our interview with Mr Sochoeun Chen, professor with the sociology faculty Phnom Penh and researcher for the Cooperation Committee for Cambodia, He brought a new depth to my idea about taking care. While we were talking on the importance of connecting the civil society with the NGO’s and government, he started talking on his personal experiences with elderly as well.

Sochoeun told us the story about his parents, and how he talks to them by phone often, even though they live in the province and he lives with his family in Phnom Penh. He needs this talks, to ventilate his thoughts, experiences and worries, and he receives council and support from his parents. Thereby he opened our eyes to the reciprocity of the family relations in Cambodia, especially from parent to child and vice versa.

He introduced the concept of house hold strategy: the way a family takes care all members have enough food and resources. Family includes parents, children, grandchildren, siblings et cetera. So even though many young adults move to the cities, they will receive support from their family, like bags of rice from the land. They in return send money they earned with their jobs. Mostly he stressed the value of the counseling of elderly for the younger generation, guiding them in their lives. He himself loves to visit his grandmother of 88 years old, who took care for him and his nieces and nephews for years when they were young. As she says: “I sleep best when all my family is under one roof”. 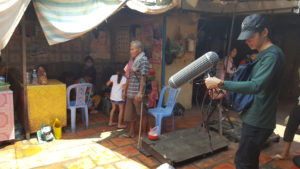 Vathanak assisting with the making of our documentary

Somehow this interview changed our concept of taking care for elderly as a one way issue, and provided us with a meaning of reciprocity and taking care for each other that lies much deeper. This was underscored the very next day, when our translator and assistant, Vathanak (22), explained to us that he lives here in Phnom Penh with his grandmother. I assumed this arrangement was for the benefit of his grandmother, he being able to take care of her. But it turned out that when Vathanak started his study in Phnom Penh when he was 18, his mother thought him too young to live by himself, and asked his grandmother to move with him from their province to the city.

One thought on “Reciprocity: taking care for each other”